The Downs, Observatory Hill, and the Sounds of the Zoo

I noticed I'd missed a bit of Circular Road and Ladies Mile, and it was a nice evening for a sunset wander up to Clifton. There was something I recorded along the way, not photographically but in video.

Bristol Zoo, the world's oldest provincial zoo, has recently decided to close its Clifton site after 185 years of occupation, which means that the sounds of wild animals will no longer drift incongruously through this leafy Georgian area. They're moving everything up to their existing second site, The Wild Place Project near Cribbs Causeway. As I was wandering the Downs, I heard some fierce roaring noises, so I decided to see if I could get a little closer while they were still going on and record a sound that's soon to disappear.

I don't have a way yet to put video directly on this site, so here's a link to the video of my attempt to catch a bit of the zoo noises that I just popped on YouTube. It's sad that this might be the last time I hear such noises in Clifton. 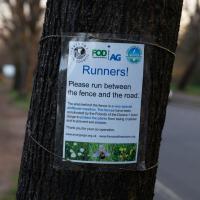 The Very Special Wildflower Meadow hasn't got any flower in it yet, that I could see. But I suppose it's only April.