It's surprisingly easy to overlook the giant Wesleyan Grenville Chapel—now converted into flats—if you've lived here a while. Other sights that seem to slip from my memory include the modest Ashton Avenue, a tidy terrace of little houses on a road that presumably gave its name to the Ashton Avenue bridge. 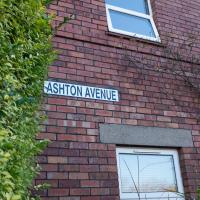 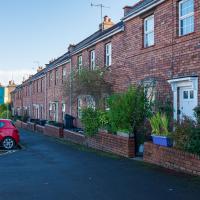 I'm never sure what to tag this area as. Is it Hotwells? It's certainly close to Hotwells, but I tend to think of Hotwells as north of the river. Is it Spike Island? Ashton? It's in BS1, not BS8. On the other hand, Ashton Avenue is in the "Hotwells and Harbourside" ward...

A quick lunchtime jaunt for coffee. I've often wondered about the dots on the wall of the underpass. Apparently they're not intelligible Braille. Maybe it's Marain :D 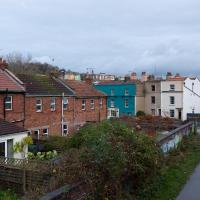 I don't think I ever crossed this bridge on foot before starting my "One Mile Matt" project. 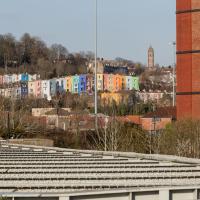 As you'll see in that photo, at low tide the Rownham Ferry was basically just a bridge made out of boats, so it probably still seemed a quick shortcut compared to walking all the way to Ashton Avenue Bridge. I imagine the foot traffic gradually migrated to the new bridge as the ferry was a more daunting prospect at high tide, from what I can gather. Also, the combined road/rail bridge would have allowed people to get the train across the river, rather than stopping at Clifton Bridge Station and using the ferry, I think.