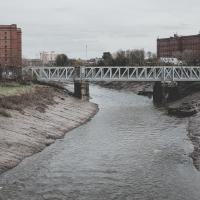 A walk back from Bedminster to my place, mostly down Duckmoor Road, which I found a little dull—probably because it reminded me a little of the suburbs I grew up in on the outskirts of London—then held up slightly by some filming on Ashton Avenue Bridge. They were trying not to let the crowds build up too much in between takes, it seems, so it wasn't a long delay. 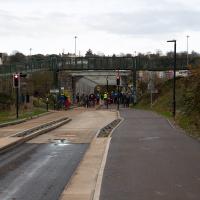 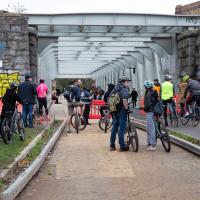 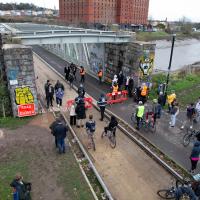 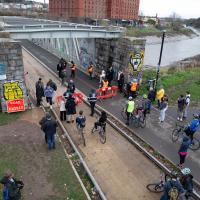 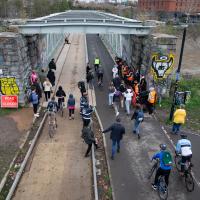 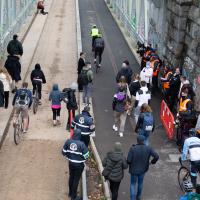 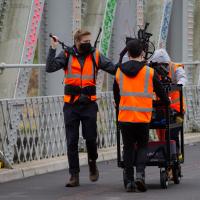 Or just a trolley?

Computer Game Puzzles and the Way to Greville Smyth

In which our intrepid hero levels up. 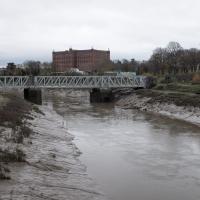 Unfortunately by the time I got to Greville Smyth Park I was already about halfway through my lunch-hour, and the queue was too long to wait to actually get a coffee. Is that a fruitless excursion? Presumably a coffee bean is technically a fruit...

This kind of vague musing was sadly overshadowed by my delay at Ashton Avenue Bridge on the way back, where someone—hopefully still a someone, rather than a body—was being stretchered up the bank of the river, presumably having just been rescued from the water. As I made my way home the long way around, avoiding the cordoned-off area at the back of the CREATE centre and its car park, I saw an ambulance haring across the Plimsoll Bridge, siren running, presumably on its way to the BRI. I'd like to think that was a good sign. 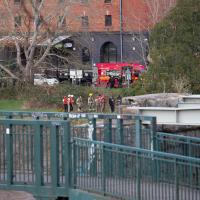 One thing I didn't know existed until this moment: Avon Fire & Rescue Service's specialist Animal and Water Rescue Units. They "...carry specialist equipment such as inflatable rescue paths, mud lances, animal rescue strops and harnesses, and a winch..." and "...have attended a range of incidents including the rescue of a woman from a car trapped in flood water and a donkey trapped in mud".

I don't know why there were here today, but that doesn't look like an animal on that stretcher/sled thingy. It looks to me rather like they're retrieving a body from the water. The police were in attendance, too, and the whole area was cordoned off.

I know from talking to the ferry crews that rather more bodies are pulled from the harbour every year than you'd imagine from any newspaper reports you might see. I'm guessing the same goes for the river. 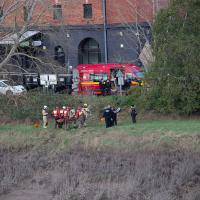 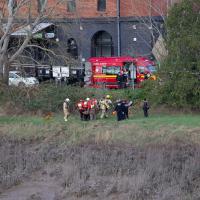 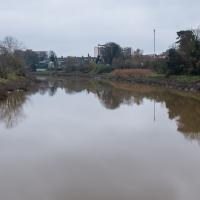 On the down side, I got to Bedminster and found long enough queues at both Mark's Bread and Hopper Coffee that I gave up on the idea of buying a drink and a pasty (from the former) or a mince pie flapjack (from the latter.) On the up side, I got to take some pictures of Cumberland Basin being drained and sluiced out, part of its regular maintenance cycle. 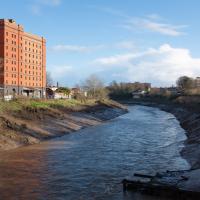 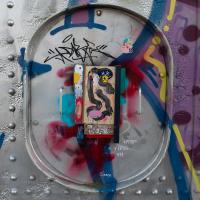 Unusually for the Ashton Avenue Bridge, this artwrok seemed to involve wooden pieces as well as just paint. 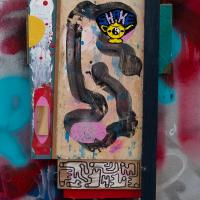 Despite a mild headache, I enjoyed this wander over to Bedminster. The light was lovely, especially toward the end. I always enjoy the view down the streets south of North Street at this time of day/year, with the distant hills backdropping the Victorian terraces. 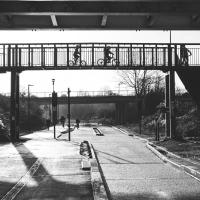 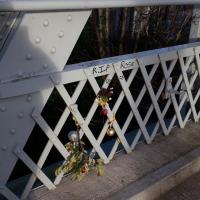 I needed to get away from my desk at lunchtime, and I saw a little segment of path in Greville Smyth Park that needed knocking off my "to walk down" list, so that gave me a target. Sadly Hopper Coffee's little Piaggio Ape wasn't there to sell me a coffee. I hope Rich is all right, not seen him so far this year.

Anyway, a fairly uneventful walk. They're putting new boundary fencing up around Hotwell Primary School (I wandered down Albermarle Row to see what the pneumatic drilling was about), the house on Granby Hill that's been covered in scaffolding and swaddled in protective sheeting has finally been revealed in its cleaned and refurbished form, and they were doing something to the flyover that leads up from the end of the Portway/Hotwell Road to the Plimsoll Bridge. Nothing much else to report. 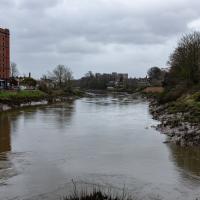 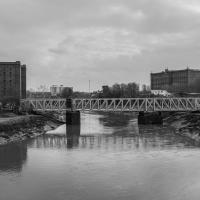 I didn't see anything too snapworth south of the river, so here's a snap from the return leg. 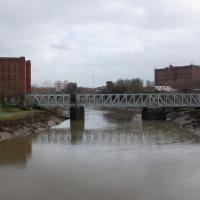 Bits of Entrance Lock have been coned off for ages, mostly the area with the lockkeepers' house on it. My friends Sarah and Vik mentioned at the weekend that it had recently been un-coned, so I wandered that way to cross the outermost lockgates for the first time this year. I don't know whether it's just my mood today or the weather, but it seemed a day for pushing a couple of photos in a more experimental direction in the post-processing... 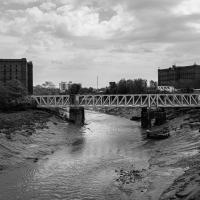