In Which Our Hero Buys Something Random from eBay

Since setting up a search for Hotwells on eBay I've mostly managed to restrain myself from buying much (or in one case, was outbid, luckily for my finances.) However, I couldn't resist a 1902 flyer for a singalong at the Terrett Memorial Hall, which would have stood five minutes' walk from my flat, overlooking Howard's Lock.

I've found out a fair bit about this non-denominational seaman's mission, including tracking down both a Loxton drawing and an aerial photo of it. The main thing that's eluded me, ironically enough, is finding out who Terrett was, so as a Memorial Hall it didn't do a very good job 😀.

EDIT: Ah! Did a little more digging and found that the Bristol Archives has a Bristol Dock Company document on file called "William Terrett, Esq.; corresp. etc. re proposed erection of a Mission Hall at Cumberland Basin, 1892", so that might be worth a look once the Archives are properly open again. Given that:

Sarah Terrett died suddenly on 25 November 1889, aged 53, after speaking at a meeting of the White Ribbon Army, the temperance organization she had founded in 1878. Following her death many people sent letters of sympathy to her bereaved husband, William. One of these, from the Rev. W. F. James, a minister of the Bible Christians, makes for especially interesting reading. The Bible Christian denomination, to which Sarah and William belonged, was one of the smaller Methodist connexions, and had its heartland in rural Devon, the area where she had grown up. James recalled the hospitality he enjoyed when visiting the Terretts’ home, Church House, in Bedminster, south Bristol...

...I wonder if William Terrett built the hall in memory of his late wife. They were clearly just the kind of temperance movement people who would've founded a seaman's mission to get people together to have a nice non-alcoholic singsong rather than a night out on the tiles.

Anyway. This walk to grab a coffee from Hopper Coffee in Greville Smyth Park was mostly an excuse to post the leaflet, a few other things I found related to it, and some pictures of how the site looks now. I would suggest that the present day is not an improvement. 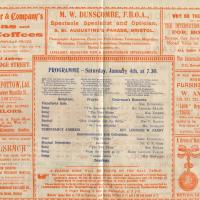 I find the adverts fascinating. My first optician in Bristol was Dunscombe's on St Augustine's Parade, so they were there a long time. They've closed now (or at least moved) but were still there as recently as 2008, I think. Interesting to see gas lighting systems being advertised, too!