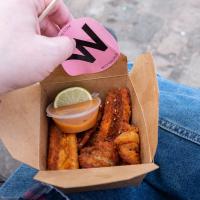 It was delish. The sauce is awesome.

Normally I don't have enough time in my lunch hour to get all the way around the harbourside. This is a shame, as Wapping Wharf is a great place to get coffee and a snack, but it's pretty much diametrically (perimetrically?) opposite me on the harbour. Today I had the day off, so I decided to go and knock off a few streets around Anchor Road that I'd not covered, as well as visiting the site of the Read Dispensary (well, one of them) and dropping into Mokoko for one of their astounding almond croissants. From there I came back along the south side, checking out the views from as much of the Chocolate Path as you can venture down at the moment, and swapping from Cumberland Road to Coronation Road at Vauxhall Bridge.

There's a lot of meh photos on this walk—my chief output from this project could be politely described as "record shots"—but a few turned out well, especially those of Vauxhall Bridge from the Chocolate Path, which reminded me how much of a loss the current closure of the Chocolate Path is to walkers and cyclists in Bristol. 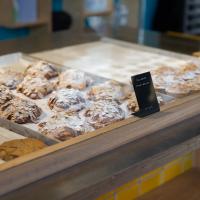 This is, to be honest, the reason I made my way all the way around the harbourside. Mokoko are pretty much diametrically (perimetrically?) opposite my place on the harbour, but the journey is worth it, especially if their amazing almond croissants are available. 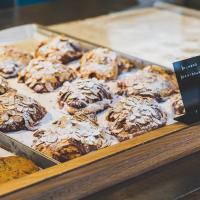 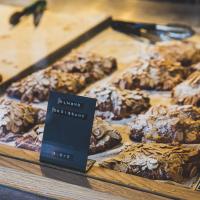 A Quick Swing Past Ashton Court

Another day not dissimilar to my last wander: I'm feeling a bit tired and rather than just moping around the house I thought I'd find some tiny bit of somewhere that I'd not yet walked and get outdoors. This time I headed for the Tobacco Factory Market in Bedminster, as I often do, but went the long way around via Ashton Court Mansion as I knew there were some footpaths and a small section of road I'd not ticked off up there. Finishing all the Ashton Court footpaths will be quite a long job, but you've got to start somewhere...

I did feel rather better by the time I got home, and, pretty much astoundingly given the weather forecast, managed to avoid the rain completely. 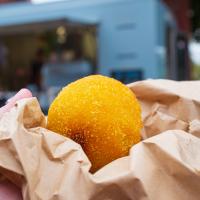 "We've just taken a giant order before you, so there might be a wait," said the server at Kind Regards Coffee when I ordered my flat white.

"Not to worry," I said, I've got a giant arancini to eat while I wait."

Once I'd said this I wondered about my grammar—presumably "arancini" was plural, so what was singular? "Anrancino", I guessed, and was apparently wrong. According to Wikipedia, it is, of course, more complicated than you'd expect:

As to the etymology:

Arancini derives from the Sicilian plural diminutive of aranciu ('orange'), from their shape and colour which, after cooking, is reminiscent of an orange.

Can't really argue with that; it's pretty bloody orange, and orange-sized. And it was absolutely glorious, all crisp and crunchy on the outside and warm and delicious on the inside. I think the stall was called Ciccio's, and I commend them to you heartily.

A New Wander, a New Cafe

Obviously, I was trying to connect to the industrial history of the Canon's Marsh area, to the old gasworks, the docks railway, the warehouses they blew up to make way for all the rather soulless modern stuff (though I do like the Lloyds building, at least.) But what I mostly got out of today's walk is a new cafe to go to for my lunchtime outings. It's perhaps a little closer than both Imagine That and Hopper Coffee; not quite as close as Foliage and Twelve up in Clifton Village, but also not at the top of a steep hill.

No, not the mediocre Costa, but only a little way away from there: Rod and Ruby's, which opened in 2018 and which I've seen in passing several times but never popped into until today. What can I say? I was foolish. Great flat white, lovely interior, astoundingly good cannoli.

Sometimes you just have to get your head out of history and enjoy a pastry. 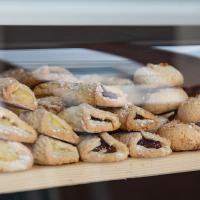 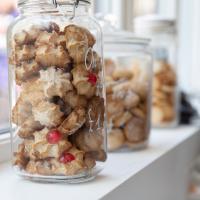 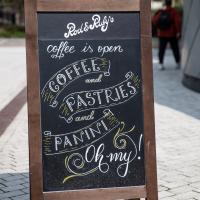 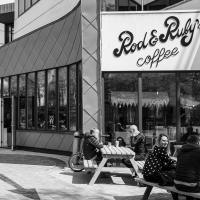 A dash around the harbourside to see if I can get to Mokoko and back in my lunch hour.

This was my first wander and I was still getting the hang of the technology. I managed to record only part of the way back on my GPS, by the looks of it, so I've had to bodge things a bit to pick up the photos, which is why there are photos in places the track doesn't reach!

I also need to fix a few technical things including managing my photo timezones more carefully. This wander was the day after the clocks went back for winter, and I think my camera may still have been in BST, which may not have helped me tie things up. Need to do a bit of research into how my cameras, Lightroom and the code I'm writing on this website handle BST and GMT, but at least I have until the last Sunday in March before things get urgent, I think... 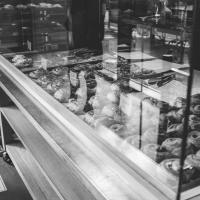 Mokoko's almond croissant are one of my favourite treats in Bristol. I'm glad they're pretty much diametrically opposite me on the harbourside—if they were easy to get to I'd be a lot fatter. 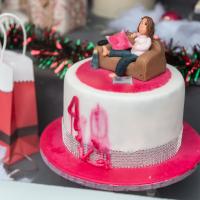 Another sign of the times: the party cake shop at the end of North Street clearly hasn't had its window display attended to for a while.

I wasn't really feeling it when I set out today, on my first car-assisted wander. By the time I'd parked on Alma Vale Road in Clifton it was just starting to rain and I picked my way about in quite a desultory way. It felt strange, as I was very familiar with the area because I'd walked through it hundreds of times when I worked at the top of Whiteladies Road, and used to walk up the hill from Hotwells and through Clifton to get there, and back again, every day.

Then a complete coincidence seemed to make the change I'd been hoping for. I was standing taking a photo of Christ in the front garden of All Saints church when a couple of people walked out of the front door. I got talking with a lady I took to be part of the ministerial team, who invited me to come in and look around—something I'd always wanted to do on the morning commute. (I think we connected a bit when I recognised the name John Piper, who did the amazing windows—I learned about him while I was at Warwick, through his connections to Coventry Cathedral.

I left with much more of a spring in my step, wandered around the area a bit more, finally working out that the tennis courts I used to pass every morning are those of Clifton Lawn Tennis Club, and finally grabbing an excellent Hungarian sausage hot dog from the Budapest Cafe. I feel a lot better now than I did before I went out. 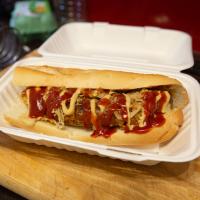 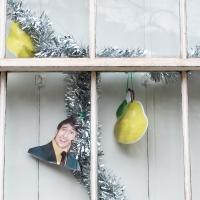 Another Lunchtime, Another Quick Coffee Trip

With very little photography, and no new streets. Still, I did manage to buy milk at the "Simple Cow" vending machine—and "simple" is very definitely false advertising; it took me bloody ages to work out how to use the thing—and snap the new ACER/SEPR piece down in Cumberland Piazza. 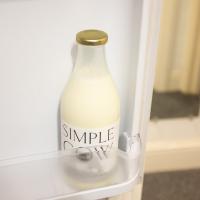 It's really nice milk. And handy with the strain Ocado are under at the moment.

I wasn't going to take a very long walk on this nice spring evening; it just happened. I was going to knock off a path or two on Brandon Hill, home over centuries to hermits and windmills, cannons and Chartists, and then just wander home, stopping only to fill up my milk bottle at the vending machine in the Pump House car park.

However, when I heard a distant gas burner I stayed on the hill long enough to see if I could get a decent photo of both the hot air balloon drifting over with Cabot Tower in the same frame (spoiler: I couldn't. And only having the fixed-focal-length Fuji with me didn't help) and then, on the way home, bumped into my "support bubble", Sarah and Vik, and extended my walk even further do creep carefully down the slipway next to the old paddle steamer landing stage and get some photos from its furthest extreme during a very low tide... 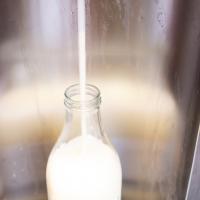 Well, one mission, anyway. I popped out for milk, taking my reusable bottle along to the vending machine in the Pump House car park.