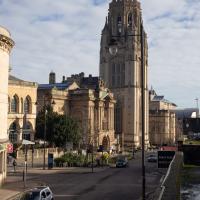 It's a good view from the end of Berkeley Crescent. Shame the lamp post is bang in the middle of a good shot of the Wills building. Ah well. 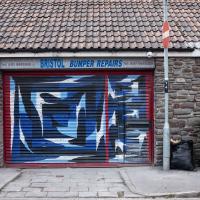 I've actually looked this place up with a view to getting a bumper repaired. Apparently he's very good. 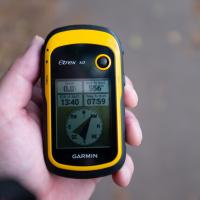 This is what I've been using to record the GPS track for all my walks. It's old-fashioned, but I find it more accurate than the phone, plus it runs off a couple of AA batteries and I only have to replace them every few weeks. Today it wasn't just recording my track, but also guiding me through a pre-planned route. Here it shows me direction, distance and estimated time to my next waypoint.

Despite the weather, Sarah and Vik and I wandered around Ashton Court a bit as the sun rose. Not that you could really tell. Sadly, the bit we wanted to watch the sunrise from was closed, because people hadn't been treating the deer with appropriate respect. Ah well, at least it was some exercise. 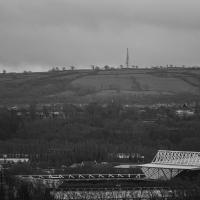 The Gridiron, Bower Ashton and the Bristol International Exhibition

Bower Ashton is an interesting little area just south of the river from me—in fact, the Rownham Ferry used to take people over from Hotwells to Bower Ashton, operating from at least the twelfth century to around the 1930s.

It's a strangely contradictory little area, with a cluster of old and new houses sandwiched in between the busy A-roads and significantly more industrial area of Ashton and the bucolic country estate of Ashton court roughly east to west, and also between Somerset and Bristol, north to south.

I've been around here before, mostly poking around Bower Ashton's arguably most well-known bit, the Arts faculty campus of the University of the West of England, but I'd missed at least Parklands Road and Blackmoors Lane, so I initially planned just to nip across briefly and wander down each in turn. On a whim, though, I texted my friends Sarah and Vik in case they were out and about, and ended up diverting to the Tobacco Factory Sunday market first, to grab a quick flat white with them, extending my journey a fair bit.

To start with, though, I nipped to a much more local destination, to see something that you can't actually see at all, the Gridiron...

(I also used this wander as a test of the cameras in my new phone. I finally upgraded after a few years, and the new one has extra, separate wide and telephoto lenses compared to the paltry single lens on my old phone. Gawd. I remember when speed-dial was the latest innovation in phones...) 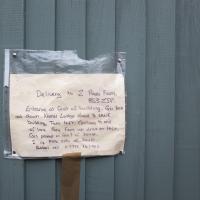 Maybe I'll have to go have a look at the front of these houses; I think I missed them on earlier walks