I spotted the fog and decided to go for a morning walk rather than a lunchtime walk today. It was cold on the Portway, but it was worth it. Most of my One Mile Matt photos are "record shots", but it's nice to get the chance to do something a bit more artistic. 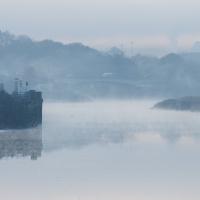 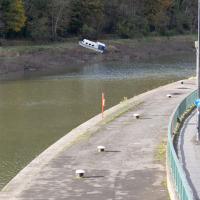 Still a new enough figure on the local horizion to draw my eye. I wonder whether this shipwreck will be salvaged, gradually dissolve into the Avon or be let off the leash by passing vandals...

The Britannia Buildings, a then-and-now Trinity, and a Bedminster Stroll

I headed to Bedminster to do a crossword with my support bubble today. On the way I delved into a couple of bits of Hotwells history, first of all snapping a "now" shot to go with a historical photo of Holy Trinity I happened across recently, and second of all to snap the Britannia Buildings.

The Britannia Buildings are a little strip of offices on a corner of the Hotwell Road. They've mostly been the headquarters of a cleaning company for years, but I've often wondered what this distinctive curve of offices, its ground floor standing proudly out from the upper floors, used to be. Well, after my last wander, where I poked about the landing stage just down the road, I found out! Researching the paddleboat company P&A Campbell I came across this nugget in The A-Z of Curious Bristol, by Maurice Fells (£):

The firm of P & A Campbell was the main steamer operator in the Bristol Channel, with its local headquarters in offices close to the Hotwells pier and overlooking the harbour at the Cumberland Basin. Campbell's named their offices Britannia Buildings, after one of the ships in their White Funnel Fleet.

So! Turns out the Britannia Buildings were named after a paddle steamer—you can see some pictures of Britannia here.

In related news, I've now bought three of Maurice Fells' local history books, and they were hand-delivered by the author on Sunday, a half-hour after I ordered them online (through a message exchange on Nextdoor!) Not even Amazon Prime has managed to deliver me anything that quickly... 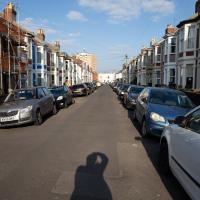 An enormous walk today, or at least it felt enormous. My feet are sore, anyway. I started off recreating a couple of local historical photos in Hotwells, but then headed for my traditional walk along the towpath in the Avon Gorge to the far extreme of Leigh Woods, up and through the woods to the height of the Suspension Bridge, finally crossing into Clifton Village for a well-deserved vanilla latte.

I say "traditional" because this used to be a very regular route for me, first walking, years and years ago, and later jogging—this route combined with a circuit of the Downs on the other side used to be my way of making sure I was fit to do a half-marathon (I did six of them in total, between 2010 and 2014).

I miss the routine of this walk, even though it's a long way and it used to pretty much wipe me out when I did it—I'd come back home and collapse and do very little for the rest of the day. But perhaps that's what Sundays are for, and I should try to remember that.

Doing this walk regularly was quite a meditative experience. Not so much of that today, but once I got to the further extreme of the towpath, where the roar of the Portway traffic on the other side of the river dwindles and I turned into Leigh Woods to climb ever closer to birdsong and further from rushing cars, I did seem to recapture a little of the feeling of previous walks. (I would say my mind cleared, but I was mentally singing along to Life Without Buildings' The Leanover for most of the wander. There are worse songs to have stuck in one's head, though; it's a great track...)

Anyway. Apparently the walk made me more likely to ramble in words, too. I'll stop now :) 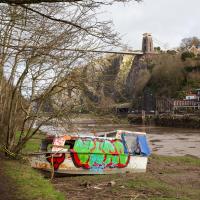 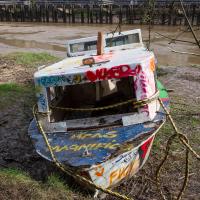 I took advantage of a rare recent day where it wasn't tipping down with rain to get away from my desk on a lunchtime workday and head up to Clifton Village. I'd hoped to snap a reproduction of historical photo which I'd worked out had been taken from the Suspension Bridge, but the gods were not smiling on me. Still, taking only a nice long lens with me worked out very well as the lovely haze of the day made more distant views quite dramatic... 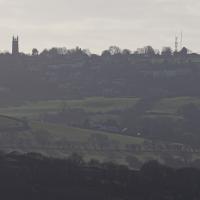 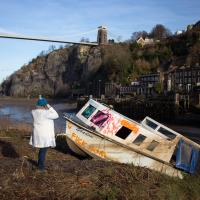 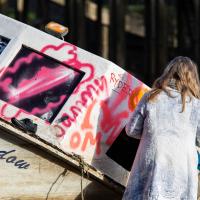 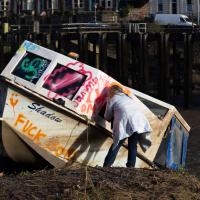 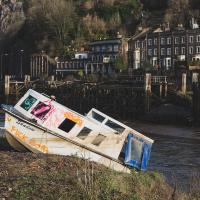 I was honestly just about to do the homework from my oh-so-thrilling ITIL course when my friends Sarah and Vik asked me if I'd like to come out for a wander down the towpath with them. I enjoyed the company, the evening light and the delicate clouds. 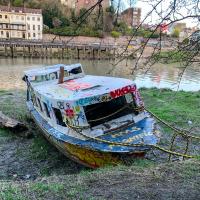 The boat formerly known as Shadow. 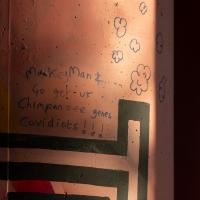 I liked the way the light hit this Cumberland Basin flyover pillar, but I'm not illuminated by the message.

You never know what you'll find when you go for a walk in Bristol. This gorgeous Mustang was in the Marina car park. Nice. I also surprised myself by getting a good photo of The Hand (to give it its full title, Green Hand of a River God, by Vincent Woropay. Thanks, @mfimage!) 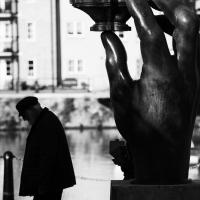 I only had a second to catch this moment, and I think I just managed it. 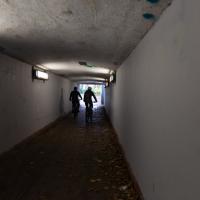 I took the day off my day job to do my accounts—or at least do enough bookkeeping to send them to my accountant. I hate doing the books. I woke up late, tired and with a headache and decided to bunk off for a walk around Cliftonwood, Clifton Village and Clifton instead, taking in a couple of good coffees along the way. Thanks, Foliage Café, and Twelve for the flat whites. 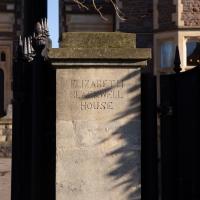 Elizabeth Blackwell, born in Bristol in 1821, was the the first female physician on the medical register of the General Medical Council, and the first woman to receive a medical degree in the United States.