I didn't have any time to find a new place to go today, so I'm treading old ground here. I did buy a tub of duck food from Amazon last week and today I remembered to take a little bagful of it with me on my trip to Imagine That coffee, and spent a few minutes feeding the marina slipway ducks on the way back. This is a Bristol tradition I've seen other people doing many times, but never tried myself. It was quite genteel until the seagulls cottoned on, then it became something of a brawl. 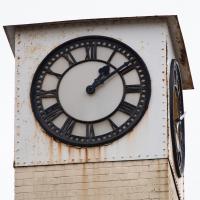 A long meander around bits of Bedminster, from the river to the north to Winterstoke Road to the south, taking a few roads I've seen before, and a few I haven't. The Christmas decorations were an extra bonus. 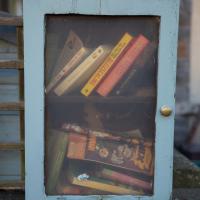 From the bohemian-feeling end of Stackpool Road.

Went for a wander with my friend Lisa—the current lockdown rules seem to be that one local walk for exercise per day with a maximum of one person not in one's "bubble" is fine—up to the University of Bristol area right at the edge of my one-mile perimeter to see the Jeppe Hein Mirror Maze, among other things. On the way we mused about Merchant Venturers, the slave and tobacco trades, and dating in the time of Covid. 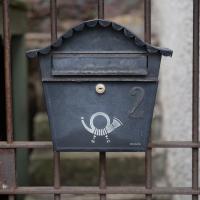 I didn't know Brabantia made these.

Another Lunchtime, Another Quick Coffee Trip

With very little photography, and no new streets. Still, I did manage to buy milk at the "Simple Cow" vending machine—and "simple" is very definitely false advertising; it took me bloody ages to work out how to use the thing—and snap the new ACER/SEPR piece down in Cumberland Piazza. 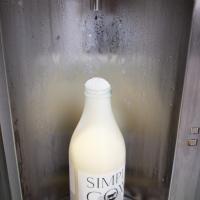 Better Look at an Extension

Apart from a lovely coffee and a slice of Victoria sponge from Twelve, there weren't any new sights on this little lunchtime jaunt except for a slightly better look at the long raised extension at the back of the St Vincent's Rocks Hotel, where I at least got to see the arches it's raised up on. I also got a fair bit of exercise by walking up the Zig Zag to get there, and saw far more people out than I have in months, what with the lockdown having just been significantly lifted. As I walked past The Mall pub they were turning people away from their already-full garden, and the (outdoor) cafe tables were pretty full up. 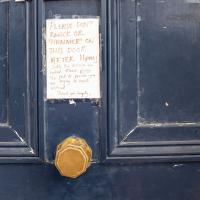 A Plea for Quietude
★★

A New Wander, a New Cafe

Obviously, I was trying to connect to the industrial history of the Canon's Marsh area, to the old gasworks, the docks railway, the warehouses they blew up to make way for all the rather soulless modern stuff (though I do like the Lloyds building, at least.) But what I mostly got out of today's walk is a new cafe to go to for my lunchtime outings. It's perhaps a little closer than both Imagine That and Hopper Coffee; not quite as close as Foliage and Twelve up in Clifton Village, but also not at the top of a steep hill.

No, not the mediocre Costa, but only a little way away from there: Rod and Ruby's, which opened in 2018 and which I've seen in passing several times but never popped into until today. What can I say? I was foolish. Great flat white, lovely interior, astoundingly good cannoli.

Sometimes you just have to get your head out of history and enjoy a pastry. 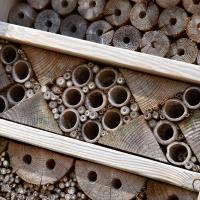 Museum of the Moon, and a Bit of Redland

Lisa and I mostly went out to have a look at Luke Jerram's Museum of the Moon as its tour hit Bristol Cathedral—I missed it when it was previously in town, at Wills Hall, I think—but we also took a trek up to Redland. Lisa's kind enough to indulge my strange current fascination with the Edwardian eccentrics that made up the Stella Matutina, so we swung by a couple of places with a vague connection to the Bristol branch of the organisation. Well, it was good walking, anyway...

As a stunning bonus, one of the picture's descriptions has more information than you'd probably want on the Bristol Port Railway and Pier's Clifton Extension Railway line, but I did happen to coincidentally write up this wander after reading about the extension line during my lunch hour at work today. It's a thrilling life, I tell you... 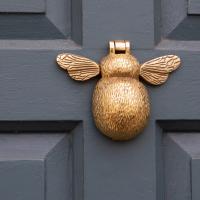 I'm afraid that this is a bit of a badly-curated wander, where I mostly just popped out to find out a little of the history of Underfall Yard and poke around the various open workshops, and, in hindsight, really didn't take pictures in any kind of coherent order. So there's a lot of pictures, but they don't really tell the story that, in hindsight, I seem to have been trying to tell, of the unusual electrical substation in Avon Crescent, the Bristol Electricity that predates the National Grid but is still in use, the history of the hydraulic power house... It's a bit of a mess.

But I suppose sometimes these wanders—always chronologically presented in the order I walked and took photos—simply will sometimes be a bit of a mess. Let's hope you still get something out of it, anyway... 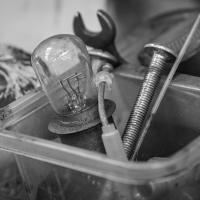 Despite the weather, Sarah and Vik and I wandered around Ashton Court a bit as the sun rose. Not that you could really tell. Sadly, the bit we wanted to watch the sunrise from was closed, because people hadn't been treating the deer with appropriate respect. Ah well, at least it was some exercise. 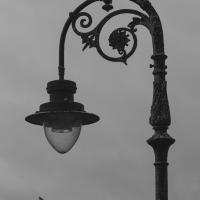 I love the lamps on Royal York Crescent. 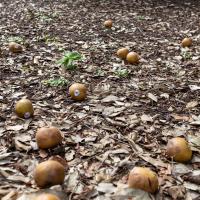 It didn't seem likely that there was a large scattering of windfall apples in Victoria Square. In April. Under a pine tree. On closer inspection, they had plastic supermarket stickers on them, so I think they're unlikely to have fallen from anywhere local...