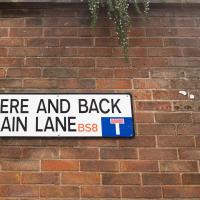 There and Back Again Lane
★★★

One of the best street names in Bristol. The street itself isn't up to much, mind.

The lunchtime walk has been feeling a bit of a chore lately, especially as I only have an hour and have to keep a mental watch out for my "bingo" point or risk being late back. Today I went for a deliberately brief local walk and got home in time to have lunch on my sofa rather than while I was back at work.

It's interesting filling in the gaps in my Clifton Village knowledge, especially starting to "see" the bits I can't see, the negative spaces. The size of both Fosseway Court and the Bishop's House gardens (check out the latter on Google Maps for an idea) are both something I've noticed by just getting to know the areas around them. I may also have to walk into the driveway of the very well-hidden Nuffield hospital to get an idea of how big it is.

None of those are anything compared to the trick of hiding the gargantuan public school that is Queen Elizabeth's Hospital so well that I keep on forgetting it's there, until a glimpse of it from somewhere like Lower Clifton Hill reminds me about it, of course... 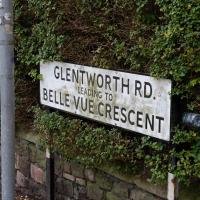 Generally "Belle Vue" transitions gradually into "Bellevue" over time, it seems, but some holdouts remain

My friend Lisa was meeting another friend for a walk near the suspension bridge, so we fitted in a quick harbourside loop from my place first. We discussed gardening (we're both envious of the gardening skills of the Pooles Wharf residents; we can just about keep herbs alive, whereas they're growing heartily-fruiting lemon trees outdoors in England along with everything from bonsai to magnolias), cafes, work and architecture, among other things. 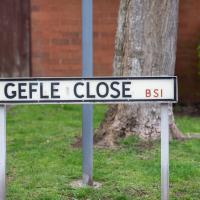 I lived near here when I first moved to Bristol in the mid-1990s. I never had to say the name of the street out loud, but it always reminded me of "GELF" back then—the Genetically Engineered Life Form that was a monster-of-the-week in a couple of Red Dwarf Episodes.

Having just done the tiniest bit of research after noticing while looking at maps that a section of harbourside here used to be Gefle Close, I found out a couple of things that make me feel a bit dim now: It's pronounced, as near as I can work out, "Yev-leh", not "geffel", and it's a port in Sweden, more properly spelled "Gävle", apparently.

Which makes a lot of sense, given that this street is on the Baltic Wharf housing estate, on the site of the wharves where apparently a lot of things from that area were imported and unloaded, especially timber, though Gävle seems to be more well known copper and iron.

It seems Gävle is pleasantly green and widely-spaced these days, having had major fires rip through it three times in the last three hundred years, and finally rebuilit itself with big espanades and a larger grid system with firebreaks. Sounds nice.

Unusually for my recent lunchtime coffee trips, I managed to find a new road to walk down: Caledonia Mews, which has a little entrance off Princess Victoria Street and runs between it and Caledonia Place. I've noticed it before a couple of times—if you look up from Princess Victoria Street you can see some of it, standing tall above the low buildings on the street itself—but until last night I'd not set foot in it, I think.

As well as focusing on this charming little mews, I looked in on the demolished site of the old WH Smith, and spotted what I think is part of the now-private-houses St Vincent Rocks Hotel that I'd not really noticed before, tucked away between Sion Lane and Sion Hill. 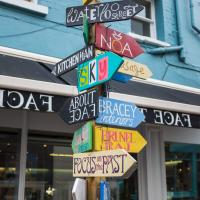 Or have I just not noticed it before, or forgotten about it? I like it, anyway.

A Coffee and a Curve

I wanted to have a wander along to the Tobacco Factory Market for some shopping, and checking the map for any leftover nearby streets I noticed a tiny curve of road on the way into the modern flats at Paxton Drive that it didn't look like I'd walked down before. I wouldn't take me too far out of my way, so I decided to head there first and then across to North Street to get my groceries and a coffee... 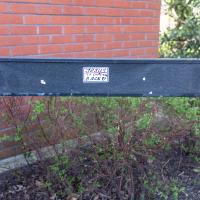 Jesus Is Coming Back
★★

Well, I hope he's bringing the sign he nicked from this end of Paxton Drive with him.

I went to have a peep at the giant sinkhole that's opened up in Canynge Square—ironically, having recently discovered the gardens were public I'd had the (triangular!) square on my list to re-visit for a few days, but now there's no entrance to the gardens due to the danger. The area was well fenced-off for safety, but I tried to get a couple of photos from behind the barriers.

I also explored the area around Camp Road, an real melange of architectures, one of the most mixed-up areas I've seen in Clifton, in fact, and confirmed my friend Claire's suspicion that an earlier snap of a sign from Manilla Road was in fact for a fire hydrant. Nice. 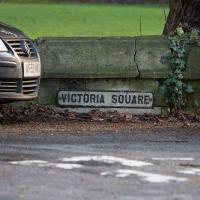 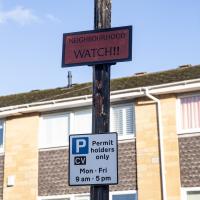 I've seen a few of these old signs around. I wonder what vintage they are?

There's a dearth of my favourite coffee places on a Monday and Tuesday at the moment. Both Twelve and Imagine That are closed on Monday and Tuesday, and Rich from Hopper Coffee doesn't seem to have come back from Christmas break. Today I pushed on a bit further than normal around the harbour and got to Little Victories, the always-reliable sister cafe to Small Street Espresso, based at Wapping Wharf. Along the way I saw graffiti, my second reference to one of Bristol's twin cities in two days, and a rather sleek little boat outside Rolt's Boat Yard. 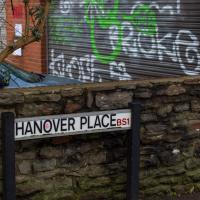 Bristol has been twinned with Hanover since 1947. Yesterday I walked the length of Hanover Lane; today I passed Hanover Place. 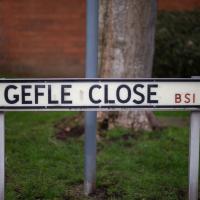 It always reminds me of the GELFs from Red Dwarf. 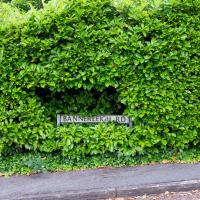 It caught my eye not just because I've been here before—there's a lovely house just up the hill which I think may itself be called Bannerleigh House—but also because the recent University-based wander I went on with Lisa also had a Bannerleigh. 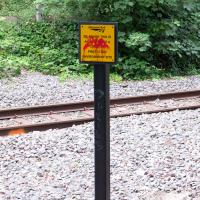 The local taggers showing their respect for the environment... 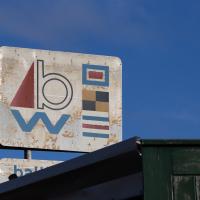 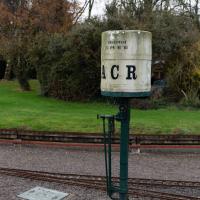