I bought a vintage post card from eBay this week. It's a well-known photo of the Hotwells landing stage, showing what's likely to be a P&A Campbell paddle steamer moored there. (Just yesterday I snapped a photo of their buoy on display at Underfall Yard with its information sign.) It was posted from here to Canada in 1936, and has now returned via a presumably quite circuitous route.

Local journalist Maurice Fells (really local—I could probably hit his house with a well-flung teacake from here) notes in The A-Z of Curious Bristol (£) that:

For tens of thousands of people, the pier at Hotwells was the starting point of their day trip as they boarded steamers with names like Glen Avon, Glen Usk and Britannia. The salty tang of the sea was never far away as the steamers headed for Ilfracombe, Weston-super-Mare, Clevedon and Portishead on the Devon and Somerset coast and Barry, Porthcawl and Tenby in South Wales.

The landing stage is long-abandoned. A variety of economic issues, including fuel prices, the increasing prevalence of the motor car, the construction of the Severn Crossing giving easier access to Wales, and the collapse of Clevedon Pier during safety testing in 1970, which prevented larger pleasure boats from stopping at the resort, all led to dwindling trade.

I went to have a poke about there today, not staying for long as it's a cold day and the wind was biting. I couldn't reproduce the postcard's view—you'd need to risk life, limb and presumably a trespass prosecution—but I did try to judge the rough viewpoint and angle of the photo by lining up with Rock House, the Colonnade and the Suspension Bridge and snapped a photo looking back to where the original photographer would have stood on the pontoon.

This Bristol City Docks history page has many good photos of the landing stage and the nearby Port and Pier Railway line (whose tunnel I was in the other day) and the Hotwells Halt railway station, which was just the other side of the suspension bridge from here. 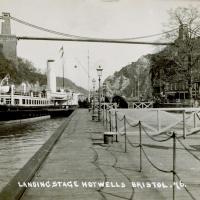 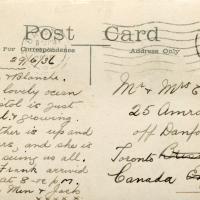 Well, I think that's what it says. 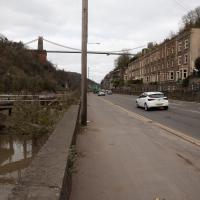 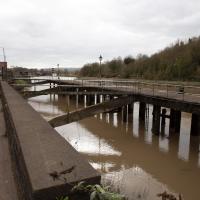 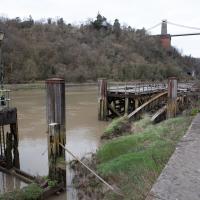 Not sure what the gap was for, or what the metal bridge-like-thingy that's gently rusting into the water was for, either. 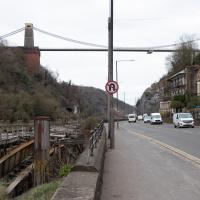 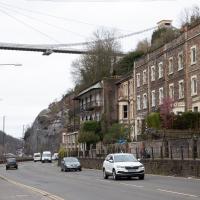 Trying to Find the Viewpoint
★★

You can see Rock House and the Colonnade clearly in the postcard. 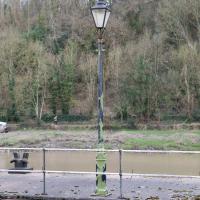 On closer inspection, this looks similar, but not the same as the lamp posts in the picture. 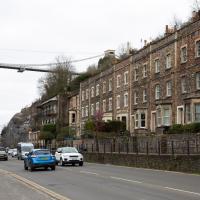 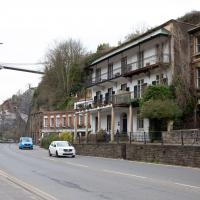 Rock House and the Colonnade
★★★

I think this roughly lines up with the viewpoint in the picture. You can just see the suspension bridge stanchion in about the right place behind the tree above the Colonnade.