A very local exploration today, but there are still bits of the near field that I never need to walk down, so it didn't take me long to find somewhere I haven't been in a decade or more, the little enclave of smaller Victorian houses around Oldfield Road and Sandford Road. I'd really like to live in one of those houses, but I doubt I could afford it. 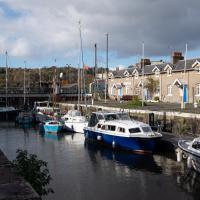 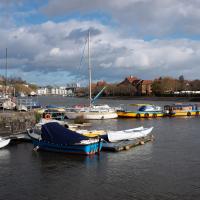 You never know what you'll find when you go for a walk in Bristol. This gorgeous Mustang was in the Marina car park. Nice. I also surprised myself by getting a good photo of The Hand (to give it its full title, Green Hand of a River God, by Vincent Woropay. Thanks, @mfimage!) 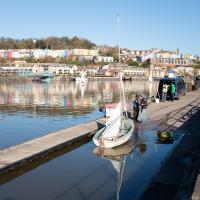 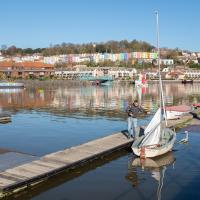 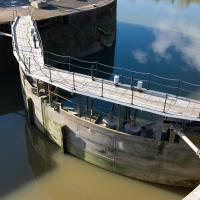 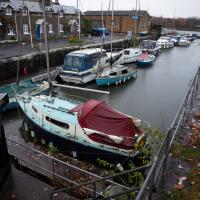 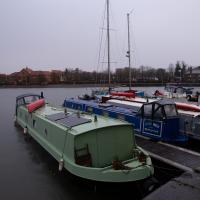 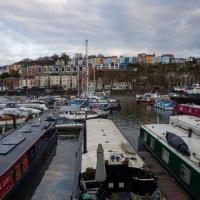 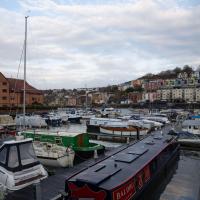 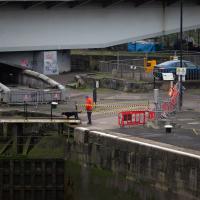 One Man and His Dog
★ 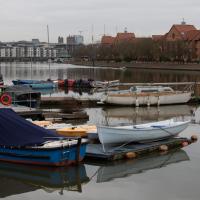 A walk with Sarah focusing on Ashton and the surrounds, taken on a day with really nice light around sunset. Just what I needed. 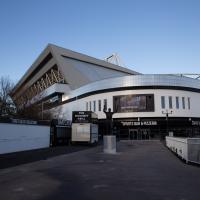 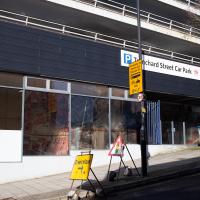 I almost didn't bother bringing out my GPS today, but as it turned out I may have knocked off a tiny bit of Baltic Wharf, having been diverted through there on my way back from Imagine That café by finding Cumberland Road closed. Not sure whether it was just some kind of delivery to the roadworks there or if they're surfacing the increasingly-dodgy looking bit of the one lane that's left open...

I also snapped a picturesque view of Cliftonwood, hung out with a biker gang, and found a little something to nibble on growing on the Hotwell Road.

Straight from the camera, this is a very traditional picture-postcard view of Bristol, I feel. This came out at 1/175 at ISO 200 after I'd set the aperture to f/16, so you could also consider it a validation of the "sunny sixteen" rule :)

Another quick excursion to Canon's Marsh, tempted back by Rod & Ruby's cannoli and flat white. This time I poked around some bits of the modern flats I'd not really experienced before, mused on the old gasworks, and headed back down the Hotwell Road, spotting a re-opening gallery and finishing off at the Adam & Eve, for which some locals are currently rushing to launch a bid to turn it into a community business rather than have a developer turn it into yet-more flats.

I was in a bouncy, positive mood, helped out by Life Without Buildings' Live at the Annandale Hotel album1. Note to self, though: the album is nearly an hour long, so if you hear the encore starting and you're still halfway down the Hotwell Road, you'll probably be late back from lunch...

1 That review's well worth a read. Music journalists tend to go extra-dreamy when trying to describe Sue Tompkins. See what I mean:

She circles her limber tongue-twisters, feints, and attacks from unexpected angles, dicing and rearranging them with the superhuman brio of an anime ninja and a telegraphic sense of lexical rhythm. 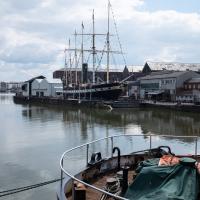 This is the stern of MV Balmoral, previously owned by P&A Campbell, the steamship operators, who I've mentioned once or twice before. 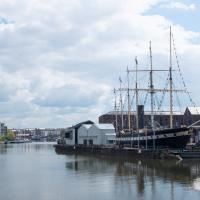 A Trip to the Library

I had to return a book to the library—Ellic Howe's Magicians of the Golden Dawn, very interesting, thanks for asking—so I decided to pick the Central Library as my drop-off point and walk down a segment of Deanery Road that I've surprisingly overlooked so far. In any normal time I'd have been walking to work that way quite often, or heading through at the weekend on the way to do some shopping in the city centre, or for a coffee at St Nick's, but those excursions have been quite thin on the ground for the last year or so, for obvious reasons.

I've never been inside a single building on Deanery Road itself; the Library is technically on College Green and the rest is mostly student accommodation or Bristol College buildings, by the looks of things. It's a fairly mediocre street, used merely to get to other places. (St George's Road, which merges into it, at least has the distinction of several good shops verging from the practical and long-lived car radio fitters to the excellent little Dreadnought Books, sadly currently closed for refurbishment...)

After dropping off my book I came home via the harbourside, the better to enjoy the nice sunny blue skies of the day. 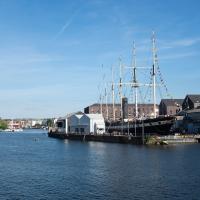