Of Bridges and Buoys

A trip to Imagine That coffee, so no fresh roads knocked off my list, but I stopped off to snap a couple of the engineering-related bits of the docks: the Campbell Buoy (used by P&A Campbell for mooring their paddle steamers) and Brunel's "other" bridge, the foot/horse swing bridge that now sits sadly disused in the shadow of the Plimsoll Bridge at Howard's Lock. 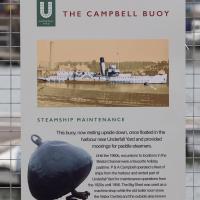 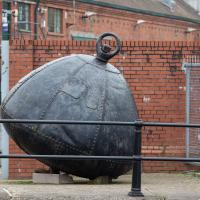 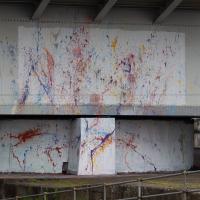 Only a week ago this looked completely different. 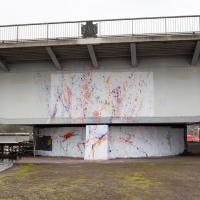 This is the pivot point for the Plimsoll Bridge. I don't think I've ever been down right here when it's swung. 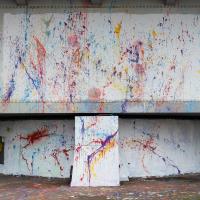 Someone seems to have installed a tribute to Jackson Pollock. 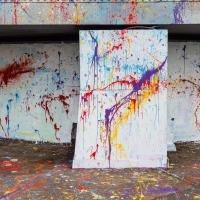 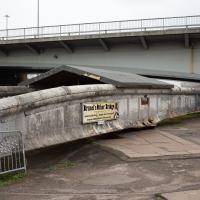 Brunel's Other Bridge ("Bob") was originally made to carry traffic over the South Entrance lock.

As part of the redesign/replacement of the North Entrance lock by Docks Engineer Thomas Howard, it was shortened and moved here, to the lock now known as Howard's Lock.

It was decommissioned in 1968 after the giant Plimsoll swing bridge that dwarfs it in the picture was put in as part of the Cumberland Road Flyover system.

A team of dedicated volunteers have been restoring it and documenting the process, and the bridge itself. 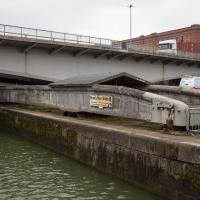 From here it's easier to see the pivot point for Brunel's Other Bridge, and the wheels at this end which would have helped it roll. It weighs about 68 tons, and was originally turned by a hand crank before being converted to hydraulic power like much of the rest of the docks equipment.

You can see an aerial photo of it in place in its "swung" position on the Brunel's Other Bridge website.